Comments from the judges 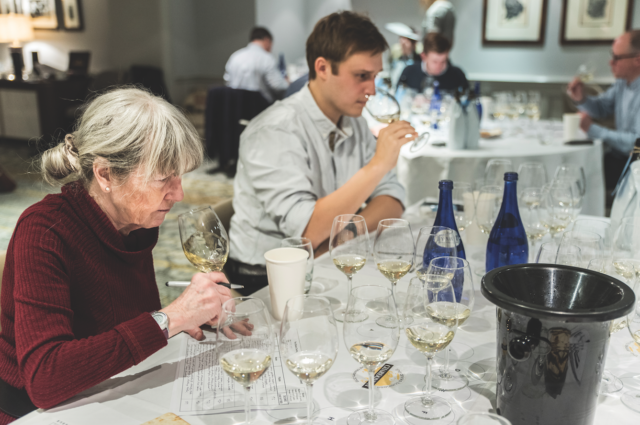 Patricia Stefanowicz MW and Thomas Parker MW at the tasting

What I liked: Simple wines, unoaked, (below £15) were fun and frolicking: bright fruit, lovely freshness and nice balance. Not necessarily exciting but exactly what one hopes for in pure Chardonnay.

The consistency in oaked wines above £20 was a special gift from the wine God. All showed ample and attractive fruit flavours with integration of structure and delicate oak treatment.

Every wine at the very high end of pricing (£30+) was polished, lovely acid balance and good definition and length, excellent wines and the occasional Masterwork. These wines were in fact delectable, as indeed they should be. There were a couple of special wines, showing depth of flavour with racy acidity holding the integrated flavours of orchard fruits and creamy oak. One ‘old school’ New World wine explained why the big, rich, ripe, full-bodied style with plenty of oak has its proponents…where is the rabbit with mustard, saffron and crème fraiche, please?

A delectable surprise was the beautiful balance in alcohol levels, seemingly lower than in the past.

What I didn’t like: Some of the wines were just plain dull, whether unoaked or oaked. Other wines seemed to be trying just a little too hard, especially at £15-20. Occasionally there was too much smoky oak or the wines were lacking fruit and definition. A few wines were a bit green and sour.

The move away from heavily oaked chip’n’pin(e) styles continues apace… More significant is the anxiety that, in an attempt  to move away from too much oak, there has been proclivity to resort to too much by way of lees stirring, replacing, therefore, one artifact with another, with all the implications entailed on the redox potential of the wine. So it was even more pleasing to see that there were not too many wines that tasted of oatmeal and sour honey.

There was a very strong showing from Australia, carried nicely across the price ranges, the two stars for me (Tapanappa Tiers and Bird in Hand Ted) both expensive but deservedly so. Battling a little above its lower weight division, if I may mix metaphors, was the St Andrew’s Chardonnay from Wakefield Taylor in the Clare. Australia is not trying to be an antidote to Burgundy or, paradoxically, a Burgundy doppelganger; its identity is forged with increasing subtlety and discretion, especially in the cool climate areas.

The overworked wines were few and far between, which was good. I don’t like the wines where a vestigial proclivity to stave ageing or similar leading to what can only be described as cardboardy tastes, often bitter and/or sour. There were relatively few wines like this, and not too many where reduction / Hydrogen sulphide, posed a problem. So all well and good…

There were, to be fair, very few French wines, but it was something of a surprise that some of those that featured actually tasted more New World than the actual New Worlders; I am thinking in particular of a Meursault from Bocard, pleasant enough, but it seemed to lack the subtlety and elegance of some of the New World wines. What goes round, comes round, I suppose!

The tasting proved to me how great Chardonnay can be. Most of the wines were perfectly balanced with well-integrated oak and most of the entry level really outperformed particularly Chile. On the higher end I found some incredible complexity and elegance from the cool areas of New Zealand and Australia. Margaret River and Adelaide Hills really shone for Australia during the tasting while Hawkes bay in New Zealand was the top performing area in my opinion.

I really liked the style of the overall tasting and in particular how some of the top winery in Australia can now re-create an almost spot on Burgudian style. The scores say it all, plenty of masters and solid silvers all around. It was an outstanding tasting with plenty of different styles to choose from.

I would have loved to see more samples from the new wave of Californian wine makers, but the tasting showed that South Africa can perform extremely well and there were few examples from Stellenbosch and Durbanville that got great medals for their complexity and character.

The quality was amazing overall with very little faulty wines.

It was very useful and interesting to be able to update my own perspective on the state of Chardonnay in the New World .

I thought that the S. Hemisphere shoed very well, especially Australia and even more NZ. It appears that a very good compromise on style and balance has now been achieved, nicely between the rather heavy, alcoholic, oaky and buttery character that seemed to prevail downunder in the ‘80s, and the more recent trend, especially in Victoria to an almost excessively lean style with high acidity and a certain sharpness and austerity. The middle ground works well and there is clearly room for good stylistic differences within it as illustrated by several of our gold medal winners here.

There were very few wines indeed that did not merit a medal. It was therefore a very enjoyable exercise, with plenty of quality and variety on show. A pair of NZ wines stood out in my book. I was pleased that none of the wines we tasted suffered from excessive use of new oak.

No major criticisms from me. Some wines were simply playing it a bit safe and lacked any sense of originality. One or two of the cheaper wines did indeed taste cheap and somewhat processed, cellar techniques being more obvious than any influence from the vineyard. In a couple of cases I felt that the wines might have been better if the MLF had been prevented. Freshness is all important and a few wines just lacked vitality.

If there was one surprise, then perhaps the overall performance from NZ, clearly no longer a one trick (sauvignon) pony. One example was certainly a surprise in that it shouted sauvignon much more than chardonnay. It made me suspect the influence of particular cultivated yeast strains and while it was very attractive, at least to devotees of sauvignon, it might possibly have surprised a regular chardonnay drinker.

It is clear from the tasting that we have really swung towards reduction and freshness, but as ever the quality of winemaking is critical. The wines highlighted the variety’s malleability.

I noticed that the Chilean wines had a distinctive character, and that generally speaking the new world wines were cleaner but also often over zealous in their swing towards reduction and acidity.

In general, few wines showed excessive alcohol, oak was rarely an intruding factor and despite the move to acid and reduction most wines were eminently approachable, although I didn’t like excessive reduction that scalped fruit.